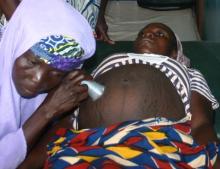 For many years, the maternal mortality rate (MMR) in Malawi has been one of the highest in Africa. It had almost doubled from 620/100,000 in 1992 to 1221/100,000 live births in 2000. In 2007, to reverse the spiral of preventable deaths, the Malawi government issued Community Guidelines that prioritised skilled birth attendance and institutional delivery, whilst simultaneously banning traditional birth attendants (TBAs) from participating in routine deliveries.

Given that skilled birth attendance is globally recommended to reduce maternal mortality, the Malawi government seemed to have taken the right approach. However, a recent study, considered by HIFA members during April, found that the 2007 Community Guidelines had ‘aggravated’ the barriers to maternal care already faced by women. There was also evidence that, “the policy had further ruptured linkages between community and health facilities, which were ultimately detrimental to the continuum of care”.

The study is currently restricted-access but Neil Pakenham-Walsh (HIFA Coordinator) has seen the full version. It reveals that the Malawi government has since rescinded the ban on TBA participation; they will now be ‘conducting deliveries only in unavoidable circumstances’. “This is a recognition that TBAs will continue to be 'in charge' of childbirth in some situations”, Neil told the HIFA forum. “Where there is no trained health professional available”, he continued, “a trained TBA could mean the difference between life and death”.

At the time of writing this (June 2019), HIFA is coordinating a thematic discussion about the WHO guideline on health policy and system support to optimise community health worker (CHW) programmes. Neil asked HIFA members if selected TBAs could be trained as specialised CHWs.

“It’s not only positive but necessary”, replied Mohammed Barzegar (HIFA member, Iran), recalling his experiences of training beharvz (the Farsi term for a CHW) to take on newborn deliveries in Iran during 1971, in addition to delivering routine primary healthcare to a population of approximately 1500-2500. Unfortunately, the project suffered a setback when the combined workload became too much for the beharvz, who were also being publicly discredited as inexperienced by TBA colleagues. A compromise was reached with community leaders whereby beharvz would not attend a delivery if a TBA was available, but would provide sterilised equipment, antiseptics and – if requested by the TBA – assistance.

The author of our Quote of the Month, Joseph Ana, agrees with Neil’s assertion that trained TBAs are a vital resource. “It is better to task shift activities in child birth”, he stated, “but ensure that the TBAs are trained, equipped with clean equipment and then monitor their practice”. He reminded HIFA members that pregnant women placed a great deal of trust in TBAs, choosing them to deliver their newborns even when skilled practitioners were available. “Until there are sufficient skilled personnel to go round”, he concluded, “a planned and structured engagement of TBAs makes better sense especially in low- and middle-income countries”.

The discrediting of TBAs or banning them from participating in births is not confined to Malawi, however. Since 1986, Marion Subah (HIFA member, Liberia) has been working in a leadership role with Traditional Midwives (TM) in Liberia. “There is not a delivery that happens in rural areas in Liberia”, she stated, “without more than one Traditional Midwife (TM) and sometimes a Trained traditional midwife (TTM)”. The training of Liberian TTMs was previously based on a curriculum developed by the Ministry of Health and approved by UNICEF. The impact of civil war, however, took its toll. “During the war years”, Marion told HIFA, “many came to help and brought their own ideas and distorted the program instead of building on it, creating even more challenges”.

The problems didn’t stop there. Global experts in maternal health withdrew support for TTMs, reasoning that the causes of MMR could only be managed in hospitals. Through sustained advocacy, she is helping to reintroduce TTMs into maternal health teams across Liberia.

In regard to training TBAs as specialist CHWs, however, Marion is unconvinced. “I am very cautious as I hear people talking about CHWs. Many are not talking about TMs but rather a new cadre and now I find myself again trying to convince experts that TMs are resources at the communities and we need to support them and work with them.” Joseph Ana agreed, warning that, “not to use a resource (adopt them, train them, equip them, monitor them) that is already on the ground but rather only build newer cadres like CHW (as laudable as it is) is a big missed opportunity in LMICs”.

Indonesia is one country where support for TBAs is desperately needed. “They are part of the local culture, important and respected by the community where they live”, explained Anna Alisjahbana (HIFA member, Indonesia). “Unfortunately many are semiliterate and unresponsive to new medical technology”. A qualitative study of previous training programmes for Indonesian TBAs found deficiencies: no consideration of their culture or habits, poor post-training supervision, and no opportunity to refresh their skills. The Indonesian Ministry of Health wants to replace TBAs with midwives. Meanwhile, Anna has "started developing equipment, recording forms based on appropriate technology principles. Tools, acceptable, applicable, easy to use and effective need be provided for TBAs”.

Anna knows there is still more work to do. “It will not have a significant result unless a working referral system is available”, she told the forum, adding that better partnerships between midwives and TBAs based upon mutual respect are vital. She also made a prediction: “TBA’s will disappear naturally if rural women are more educated and can make choices.”

For David Gisselquist (HIFA member, United States), such freedom of choice for expectant mothers in LMICs is in short supply. The implications are serious. “Mandating that women deliver in health centers without traditional birth attendants violates women's rights, as stated in The Declaration of Lisbon on the Rights of the Patient”, he told the HIFA forum. He went on to explain that it removes the patient’s right to self-determination – one of the guiding principles of the Declaration – and to make free decisions regarding him or herself. It also places the patient’s safety at risk, particularly if standard precautions in health facilities are lacking, leaving them vulnerable to nosocomial infections. Malawi is one of many countries where such issues remain unaddressed. It’s vital that such facilities are made safer because, as David puts it – “women should be allowed to decide for themselves where they feel safe.” Empowering citizens to make informed decisions about their own health (and the health of those for whom they are responsible) is fundamental to achieving the HIFA Vision.