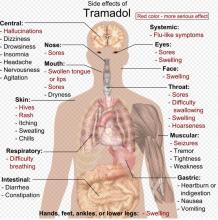 Quote of the month: “They are dying from overdosage. Am told they take it to be "high". Some go to the extent of combining it with weed to enable them last longer during sex.” Eben Afarikumah (HIFA Country Representative, Ghana)

More than 115 people in the United States die every day after overdosing on opioids, including prescription pain relievers, heroin, and synthetic opioids such as fentanyl. Global media coverage has highlighted decades of mass over-prescription as one of the main contributory factors, leading to misuse and addiction. Another ‘opioid crisis’ is engulfing many countries in West Africa, albeit with a somewhat lower public profile, and has resulted not from mass over-prescription but widespread and unregulated availability. Recent years have seen an explosion in the recreational use of tramadol by young West Africans. Tramadol is a powerful, opioid-based painkiller which can be addictive if used inappropriately or for too long a period. As our Quote of the Month attests, with little or no information on safe dosage and appropriate use, young West Africans can and do experiment with tramadol in a variety of ways.

HIFA member Isaac Traore is a Biosecurity Specialist at the Malian Association for Biosafety and Biosecurity and he is well aware of the crisis unfolding in his country. Writing on the HIFA forum during March, he stated, “Last week I had an informal talk with young people here in Mali about Tramadol. It's sad to hear that they use it to be high, most of them buy it from street drug sellers.” For Isaac, ending both unfettered access to and uninformed use of tramadol by young people, requires a strategy “to promote stewardship in controlling drugs abuse”.

Augustine Ologun, a Nigeria-based Global Volunteer, Public Health, Humanitarian and Community Development Specialist, agreed. According to Augustine, “the intake of Tramadol has increased and is now a norm among in-school adolescents”. Availability of tramadol is high in Nigeria due to the boom in illegal imports, which recently prompted the National Agency for Food and Drug Administration and Control (NAFDAC) to declare a national emergency to address the tramadol abuse, particularly in children and young people. This followed a recent report, quoted by HIFA member Olusesan A. Makinde, that NAFDAC operatives had intercepted and seized 33 containers of tramadol, which were being conveyed to an unknown location in Nigeria: the latest in a series of such ‘swoops‘ by customs officials.

Not all illegally-trafficked tramadol is intercepted, however, and there have been calls for a ban both on imports of tramadol and also the production of codeine-based syrups, also commonly abused in Nigeria. Olusesan opposes the introduction of such a step, reminding HIFA members that both tramadol and codeine have a therapeutic purpose, and that “banning them will deprive those that need them the most”.

A recent thread on Twitter, shared with the HIFA forum by Joseph Ana (Nigeria), illustrated the urgency for decisive action to end Tramadol abuse. It concerned Twitter user @Olubaba60, who had completed studies at the National Youth Service Corps, an organisation set up by the Nigerian government to involve the country's graduates in the development of the country. He started taking tramadol and Refnol (flunitrazepam), finding that the ‘high’ gave him the energy to deal with the stress of attending the initial orientation camp sessions. He quickly became addicted: “Throughout my service I was always high… Had packs of drugs stashed in my room... I literally couldn't do anything without popping pills”. After leaving NYSC, his intake increased significantly: “1000mg of tramadol per day with codeine… At least 4 times in a week... I didn't realise I was killing myself”.

He came very close. Soon afterwards, Olubaba overdosed and suffered a seizure which nearly killed him. He survived but his story illustrates why stricter regulation of the availability, provision and usage of powerful opioids such as tramadol must be accompanied by accurate and clear information about when to take them and how much, along with the dangers of addiction and overdosing. As Joseph Ana put it, “We are on a ticking time bomb. One pill at a time gets us closer to a full blown crisis."