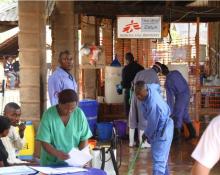 Quote of the month: "No stone must be left unturned in the fight against Ebola, because as the West Africa epidemic showed, no nation is safe until DR Congo is free of Ebola virus disease." (HIFA Steering Group member Joseph Ana, Africa Centre for Clinical Governance Research and Patient Safety, Nigeria)

During March 2019, the HIFA Supporting Organisation, Translators Without Borders (TWB) published the report of a preliminary assessment of language and communication needs for the Ebola (EVD) response conducted in Goma, Democratic Republic of Congo (DRC). According to WHO, as of 14 April 2019, 1264 confirmed and probable EVD cases have been reported, of which there were 748 probable and 66 confirmed deaths, in North Kivu Province. Findings from TWB revealed that current EVD communication materials are not fully understood in French or standard Swahili, including those which focus on prevention. The problem is exacerbated by the poor standard of reading comprehension, particularly amongst women and older people.

“We cannot break the disease transmission chain unless people understand how to keep themselves and their families safe”, stated Mia Marzotto (HIFA member, USA), sharing the findings with HIFA members. Mia, TWB’s Senior Advocacy Officer, went on to explain that the chain can only be broken once EVD prevention messaging is conveyed in languages and formats tailored to those used by the audience in Goma. As the findings also state, this is particularly challenging, given that the Goma population use a localised form of Swahili, which does not currently incorporate the terms used to define key concepts relating to EVD prevention.

A WHO statement, also shared with HIFA members during March, reported that over 90% of those eligible for vaccinations against EVD accept them, and more than 80% accept safe burials, a major factor in preventing the spread of the virus. However, a new Lancet Infectious Diseases paper, also shared on the HIFA forum, could explain why others in DRC refuse to take such measures. Of 961 people surveyed by a research team from Harvard University in Beni and Butembo in North Kivu, 25% believed EVD does not exist, 33% thought it was fabricated for financial gains, and 36% thought that it was fabricated to destabilise the region.

Given the fact that EVD was first discovered in DRC over 40 years ago, the finding that so many people doubt the existence of the virus is "Tragic, no matter how one looks at it”, said Joseph Ana (HIFA member, Nigeria). “It is not a good report for the effort that has gone into DR Congo since Ebola was first discovered.” He drew a comparison with the emergence of HIV/AIDS, where the successes achieved in controlling the disease were at least partly due to the simple, stark message of the awareness campaign: AIDS Kills.

For Simon Collery (HIFA member, Tanzania), the findings are about “trust and information, not about knowledge or ignorance”. His statement in our Quote of the Month refers to an article published on the website of Policies for Equitable Access to Health. This suggested how lack of trust could have led to declining attendances at Ebola clinics, referring to the meeting of the WHO Executive Board in January 2019, where members “heard with some amazement that: more than 85%... of Ebola ccases in Beni, Democratic Republic of Congo, have been acquired in health systems" (see 28 January, 2nd session, 47 mins). “If people are given the information about ebola transmissions occurring in healthcare”, Simon told the HIFA forum, “they will thereby have the opportunity to take precautions against a risk they may not otherwise have recognized”.

Kenneth L Chanda (HIFA member, Zambia) also referred to HIV/AIDS in his comments about the Lancet study's suggestion that some of the population thought that EVD had been fabricated for commercial gain or to destabilise the region. “This may be based on some historical studies”, he stated, “which were misconstrued that viruses like HIV were manufactured in a lab just like computer virus programs.” He felt that peer-to-peer information, sharing rather than top down communications from experts, could help the transmission of critical messages about EVD prevention to the DRC population, although it should be noted that peer-to-peer misinformation (for example through WhatsApp groups) was a major factor in driving the West Africa epidemic in 2014/15.

The TWB and the Harvard studies each make specific recommendations for how clear information could be delivered in practice: appropriately-phrased messages in the right language (TWB), delivered by trusted intermediaries (Harvard). Chris Zielinski (HIFA Steering Group member) felt that the latter could prove difficult, “…in places like North Kivu, where only 3% of the population trusted local officials enough to believe there was no self-interest in what they said”. For Joseph Ana, however, drawing on the experience of other LMICs could provide the answer, citing an example from his own country, Nigeria, when families withdrew their children from immunisation because they 'suspected' that the west wanted to use immunisation to reduce their population through infertility. Nigeria responded by mobilising several layers of opinion leaders in the community from traditional rulers to religious leaders and academicians. If the people of DRC trust their own opinion leaders, he suggested, the Nigerian model could be applied there.

Whatever approach is taken, as Joseph Ana states in our Quote of the Month, DRC remains the key to winning the fight against Ebola.