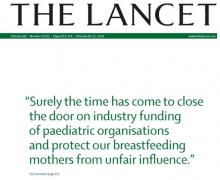 Congratulations to CHIFA Lead moderator Tony Waterston and Charlotte Wright for their publication on 9 February in The Lancet. Their article is highlighted in this week's print Lancet which features their quote on the front cover:

"Surely the time has come to close the door on industry funding of paediatric organisations and protect our breastfeeding mothers from unfair influence."

Four days later the Royal College of Paediatrics and Child Health (UK) announced that they will stop accepting sponsorship from manufacturers of breast milk substitutes.

This achievement is currently being celebrated on CHIFA, which has been promoting discussion and debate on this issue for many months. Jeffrey Goldhagen, President of the International Society for Social Paediatrics and Child Health, recalls 'There is a renowned anthropologist, Margaret Mead, who famously said, "Never underestimate the power of a small group of committed people to change the world. In fact, it is the only thing that ever has!"  What we are witnessing is a small group of people, led by Tony over many years, changing the world.' We now hope that the International Pediatric Association and individual national paediatric associations will take note and adopt a similar stance 'to protect our breastfeeding mothers from unfair influence'.