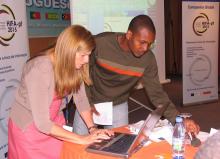 HIFA-Portuguese was officially launched on November 19, 2009 in Maputo, Mozambique when the first 350 members received the first message sent directly from the launch event (see photo).

For the HIFA family, this was a historic moment. From 2006 to 2009, HIFA was a forum exclusively in English. However, several partners had been discussing the need to create discussion networks in languages other than English and the partnership with the World Health Organization (WHO) ePORTUGUESe network led to the creation of HIFA-Portuguese. Since then, HIFA has worked with WHO and other partners to introduce HIFA in French (2010) and Spanish (2018). We are currently working with WHO to assess the potential for inclusion of other languages.

The use of the Portuguese language has allowed the exchange of experiences and debate on health issues by an increasing number of professionals who in most cases would probably not have done so in English or other language. These forums have reduced professional isolation and brought people close together. Multilingualism is increasingly recognised as fundamental for global and public health.

Monitoring of the topics covered has already enabled the development of a technical training program on health information for the PALOP and East Timor Leste in 2012, in partnership with FIOCRUZ, the Portuguese National School of Public Health in Portugal and the Pan American Health Organization. Health (PAHO) through its Latin American and Caribbean Center on Health Sciences Information (BIREME / PAHO / WHO). Discussions in the group also facilitated the development of a research project between health professionals from Guinea-Bissau and the Rio de Janeiro State University without these professionals ever meeting physically. HIFA-pt has led to many cooperative actions, courses, training and partnerships, published articles and promoted alliances that would not have occurred otherwise.

HIFA-Portuguese was led by Regina Ungerer, formerly coordinator of ePORTUGUESe at WHO, Geneva, from 2009-2015. Since the discontinuation of ePORTUGUESe in 2015 (which many of us lamented), HIFA-Portuguese has been led by Eliane Pereira dos Santos at the Pan-American Health Organization. HIFA-Portuguese now has 2,205 members from 35 countries and territories, including the eight Portuguese-speaking countries (Angola, Brazil, Cape Verde, Guinea Bissau, Mozambique, Portugal, Sao Tome e Principe, Timor Leste). We invite you to find out more and to join here: http://www.hifa.org/forums/hifa-portuguese 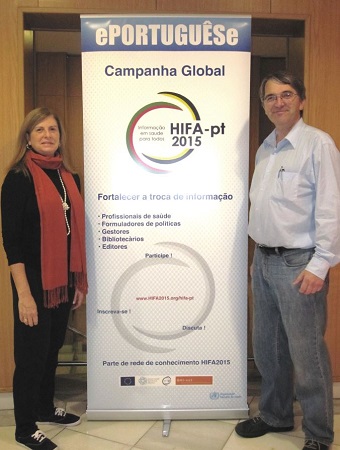