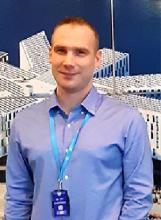 Tomislav Mestrovic is a medical doctor and a clinical microbiologist with a PhD in biomedical sciences, and an Assistant Professor at Croatia's youngest public university, University North. He is also passionately invested in global health communication, health literacy, science journalism and science diplomacy. Tomislav was appointed by the Ministry of Science and Education of the Republic of Croatia as a Managing Committee Member to COST Action on evidence-based medicine run by the European Union. He holds several positions in international societies that resulted in many volunteering initiatives. tomislav.mestrovic AT gmail.com